It didn’t quite go like we planned but somehow ended up on our feet and riding an enormous wave! Sometimes those waves take you places you weren’t expecting. And sometimes, they’re better anyway. Here’s the wave we’ve been riding: Yet more new clients! We welcome…

Lovely to have you all aboard The Good Ship SARD JV!

Now, if you’ve been with us a long time, you’ll know that we come from the “family business” mould. I think people like the “Big enough to deliver, small enough to care” vibe that we emanate and yet, every year we seem to get bigger and bigger.

So, does the “small enough to care” ever run it’s course?

Our vision for 2020, is the same vision we’ve had since we started: don’t get too big! Too often, the narrative arc of a company is the same. You start small, you build up amazing relations and just when clients get to like what you’re doing, you sell-out to one of the big boys. That’s not us. We’re not for sale. Our 2020 Vision is the same as our 2030 Vision, our 2040 and our 2050 one. That’s not even hyperbole. This is a life long commitment by my cofounders and I, to build up a company that’s instrumental in improving UK healthcare. This is our LIFE’s work. When I finally keel over onto whatever passes for a keyboard in our glorious tech future, I want people to say “Those SARDinians made a difference!”

That perspective effects how you work in the here and now.

If you want to keep that small friendly business culture but have a vision that involves a big long term impact, what are your options? Can you do both? We think you can. We do it by retaining our small, nimble, expert company but at the same time building a community around us of like minded souls who share our ethos. By chance, this is the wave we rode in 2019. This was the year of Open Everything. And we loved it!

Open Everything requires investing, long term, in SARD’s future. As we moved onto the University of Kent Campus, we started reaching out to that wider academic community. We became friends with the professors of artificial intelligence. Those professors specialise in the technology we use in our eRostering product. We presented to the computer scientists in their lectures and laid out our vision of how they can help the NHS prosper. It worked.

This year, Jordan joined us as part of The University of Kent’s Employability Points Scheme. It was only supposed to be a summer placement but we asked him to come back and keep working with us alongside his studies. He said “Yes!” What an absolute joy it is to have him working here. He’s been working on our Swagger API. More about that in Babs’ blog but it’s part of our long term vision for an open-sourced, open-API’ed, open-standards platform for the NHS. 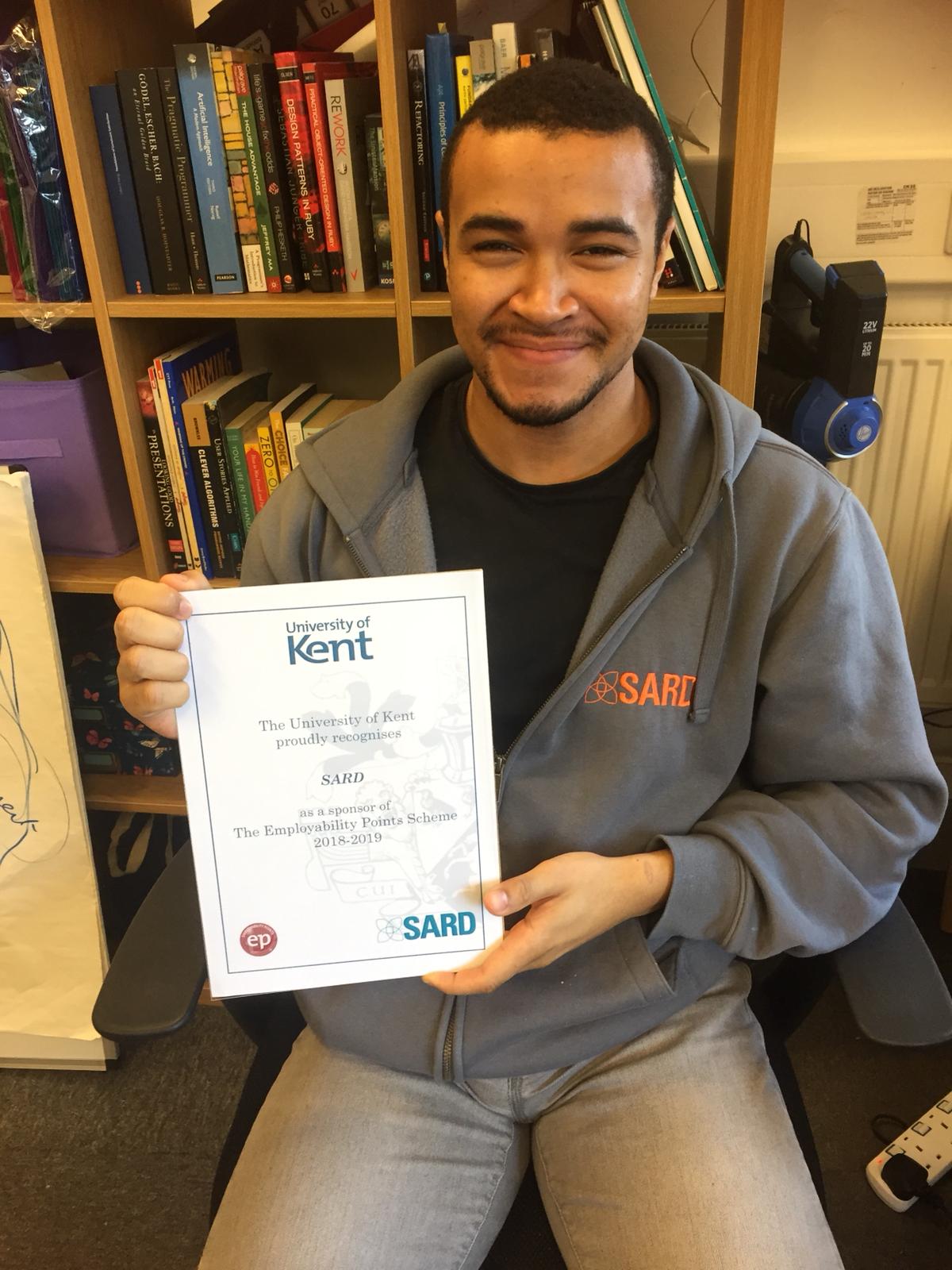 Pedro and Ash - two more computer scientists from the University of Kent - joined us as part of their Year in Industry scheme. They’re making us feel very old. Ash has joined Babs and Lucie in supporting the day to day SARD maintenance, and is responsible for every single CSV export you’ve asked for since July. Pedro is working on eRostering and we’re introducing him to archaic, grandad, programming languages like… Ruby (first released in 1995). Ah, kidz these days…

Stop. Trying. To. Do. Everything. In. JavaScript.

Just kidding. Having an influx of young tech talent is a great way to challenge… well… everything! They’ve brought a wave of enthusiasm and new ideas to the company.

On the other end of the scale, we’ve had an influx of salty old sea dogs like Rob Lacey and Artur Szwed. Both are bringing multi decades worth of software experience to our eRostering product. Great to have you both join us this year. Artur is stretching our commitment to remote working beyond it’s previous bounds of The Isle of Wight over to Krakow, Poland. And so - Witaj w drużynie!

Long time, old-skooler, co-founder and general genius who’s been with SARD from the very first line of code - Barbara White - became our CTO this year! She’s brought together this ever increasing band of tech talent into a formidable, kind and supportive team. There’s no better role model for a career in tech than the calm, considered wisdom of Barbara. As Lucie said to me: “my ambition is to become Babs!” Two Babses? Yes, please. We’ve worked together for over a decade now. The Yin to my “oh look! Shiny New Thing” Yang. Well done, Barbara. And actually, Lucie’s doing a damn good job of following in her footsteps too.

Now, I don’t know how to break the next bit of news to you but Alice Roche is leaving us after 7 years! It was her first proper job. When she joined, I said “Alice, imagine this is a Michelin starred restaurant. That’s the level of customer service we’re going for.” And boy did she run with it! She took that attitude all the way through the 7 years she’s been working here. So much so, that we quickly promoted her through the following various official and unofficial roles of:

Alice - you’ve had an amazing impact on the quality of customer service we provide. Having spoken to you, I know that even as you leave you’re keen to see that Great Customer Service legacy continued. Which brings me to the only bright ray of sunshine about this… Megan will be stepping in to be our new Customer Support Manager! She’s cut from the Michelin star mould of making sure we provide an unrivalled quality of service. Whilst we’ll miss the unique, idiosyncratic Alice-ness, I know that Megan, and the company as a whole, will build on that legacy and MCSGSM - Make Customer Support Great Some More! We might even get baseball caps. All the best for your future! Thanks, Alice.

Bringing it back to a more positive note, we did take on another recruit this year. Vicki Harden joined us. She has the incredibly difficult task of organising somebody like me. Even more incredibly, she seems capable of doing so! This is the gif that Vicki regularly sends me…

An absolute pleasure to have you with us, Vicki!

Ah. Kent and Medway Medical School. I studied at Southampton University which has a medical school. I’ve noticed that many of my friends who studied medicine there have stayed nearby. They’re now working in Poole, Southampton, Bournemouth etc. Kent currently doesn’t have that but that’s all about to change! We’ve taken the KMMS as our charity of the year as we’re keen to see a new school open on the campus here. We did a lovely bake sale to raise money and next year we’ll be running a medical quiz! Yay! Go Kent!

And so my last point before I keel over on mulled wine, is that NHSX came into being this year. Leaving aside any political feelings about Matt Hancock, it’s undeniably brought a focus on technology and open standards in the NHS. We LOVE this. Senior Technical Dude (I can’t remember his full title) at NHSX - Terence Eden - kindly attended our user event to discuss what NHSX is all about. In short: make everything open! I admitted that we whole heartedly support this brave new world of NHS technology. It’s everything we’ve been hoping for since I first became involved with Oxleas NHS Trust over a decade ago.

Next year, we will be doing our part to bring this “Open Everything” to the NHS! That’s one of our key focusses. I’m happy to say that it looks likely we’re going to be kicking that off with some very interesting projects around NHSI’s Workforce Deployment programme; starting with an open-source ESR project.

Lastly, I want to wish all our clients, staff, contractors, suppliers, competitors, friends and family, a very Merry Christmas and a Happy New Year.